This year, we are thrilled to partner with Mariela Dabbah and the Red Shoe Movement, as their shoe sponsor for the annual live event in NYC on 10/28. The Red Shoe Movement is a leading company dedicated to the career and leadership development of women. We recently sat down with founder Mariela to learn more about her story and mission.

Mariela Dabbah is the founder & CEO of the a career and leadership development company powered by a global community of professionals who support each other to guarantee women’s career success. Mariela is a renowned 2- time TEDx and international speaker, and corporate consultant whose clients include Microsoft, Novartis, MetLife, Honeywell, Walmart, Spotify, McDonald’s, Prudential, Bridgestone, and Celebrity Cruises among many others. She has presented at universities such as Harvard, Princeton, Columbia and Yale and at national organizations such as The Conference Board, The College Board, Prospanica, and Vital Voices. She has published 6 best-selling, award-winning books. Her articles have been published on Forbes, Yahoo, Univision, Fox News Latino and many other platforms.

Among the many awards and recognitions she received throughout her career: “Leader in D&I Award in an agency of any size” by the Public Relations Society of America; she’s included in the “Top 100 Influencers on Gender Equality & Diversity” by Onalytica; she has appeared twice on Time Inc’s “People en Español” magazine list of “The 25 Most Powerful Women;” and she was honored with the “Business Leadership and D&I” award by the Latino Network Coalition, a group of ERGs of Fortune 500 companies in the NYC region.

ALLY Shoes: Tell us about yourself.

Mariela: I was born in Argentina and immigrated to New York after I graduated with a Masters Degree in Philosophy and Literature. I write since I’m nine years old and I have been able to make my dream of being a writer a reality in the US first by publishing non-fiction and then by publishing fiction. My book Find your Inner Red Shoes (Penguin 2012) launched the Red Shoe Movement 10 years ago.

ALLY Shoes: We just finished out Hispanic Heritage Month. You have devoted time and energy to helping young Latino students succeed, especially in higher education. In your opinion, what are some of the most pressing issues schools should get behind, to help empower Latino students?

Mariela: I spent many years helping immigrant parents understand how the system works, because it does work pretty differently than in Latin America. I also founded a nonprofit organization for students to find all the resources available to them in one place. Despite all the years that have gone by since I was doing that work, a key factor that makes it hard for Latinos to attend college remains the high cost of education in this country.
And the other important element is the lack of social capital that many of the students have to know exactly what it entails to reach College. And the lack of opportunities for them to do internships and be recruited into top level companies as most of these companies continue to recruit at Ivy League schools where fewer Latino students can be found due to the costs involved. And even when many of these first tier schools offer free rides if you get in, most Latino families are unaware of this fact. But what’s most important is that they are unaware of all the steps they need to take in order for their kids to qualify and be able to apply to top tier schools. 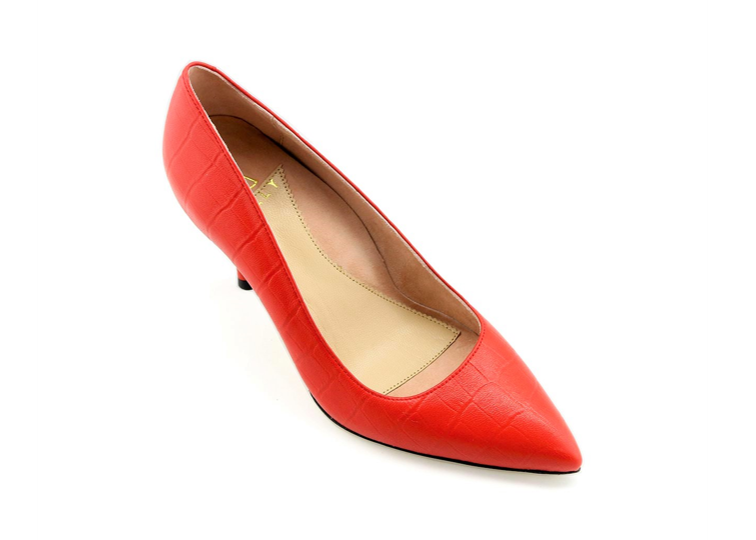 ALLY Shoes: What inspired you to launch the Red Shoe Movement?

As I was working for many years with corporations, I noticed that we needed to have a different conversation with women as they were being impacted in their careers by a certain group of predeterminations with which most of us grow up. So on the one hand the Red Shoe Movement helps women bridge the gaps in their preparation, upbringing and education, and on the other it helps companies create more inclusive cultures.

ALLY Shoes: We can't wait for the Red Shoe Movement event - can you share with us more about the event and some reasons why women should be attending?

Friday, October 28, is our We are celebrating our 10th year anniversary. This is a leadership development event unlike any other because it’s an experiential conference. You will experience our mutual mentoring approach, where each one of us plays different roles during the day. We don’t have the traditional speaker format where you sit and listen to speakers. It’s a constant interaction between senior level executives and more junior talent. It’s a very memorable day, about which people talk about years later. We are lucky that this year ALLY Shoes is our shoe sponsor and for they have a bigger chance to get their own pair of red shoes to attend in style.

Members of the ALLY Shoes community can register with this code (rsmse2022nyc) to get a discount!

ALLY Shoes: Who is your biggest ally?

Mariela: I can’t say I only have one ally. I’ve always had many. Starting with my parents who have always supported my entrepreneurial spirit, my life partner, who has come into my life a few years ago and has, from the beginning, been my biggest champion, and many members of our Red Shoe Movement community, partners and clients who are always there supporting our dreams to expand our impact. Gustavo Carvajal, Annerys Rodriguez, Teresa Correa, Marie Chalita, Havi Goffan are just a few who make it all possible.